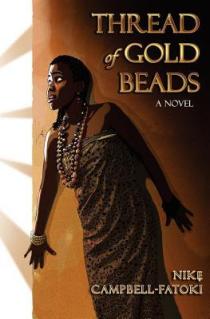 First of all, I would like to thank the person who bought this book to my attention.  May God Bless you and your children for several generations. I am being a bit dramatic here, but it’s only because I really love this book. The only two things I knew about Benin, before, was Cotonou and King Gbehanzin. We learned in primary school of the kingdom of Dahomey and of course, of King Gbehanzin. I think the king resists French colonization or something like that. Now thanks to this author, I know a whole lot more. My guilty pleasure is reading historical novels, anything historical. So, imagine my surprise when I discovered that the setting of this novel was none other than 1800’s kingdom of Dahomey.  I really love to be surprised by books that I don’t know nothing about.

But first, as usual, a word about the author

Nike Campbell-Fatoki was born in Lvov, Ukraine to Nigerian parents. She spent her formative years in Lagos, Nigeria, listening to stories and folktales told by her maternal Grandparents. She holds a Bachelor of Arts degree in Economics from Howard University and a Master of Arts degree in International Development from American University, Washington, DC. Presently, she is a Budget and Finance Manager in the municipal government in the Washington DC area. She is an avid reader. She loves traveling, watching movies and listening to music. She lives in the Washington DC area with her family.

Amelia, daughter of the last independent King of Dahomey, King Gbehanzin, is the apple of her father’s eye, loved beyond measure by her mother, and overprotected by her siblings. She searches for her place within the palace amidst conspirators and traitors to the Kingdom. Just when Amelia begins to feel at home in her role as a Princess, a well-kept secret shatters the perfect life she knows. Someone else within the palace also knows and does everything to bring the secret to light. A struggle between good and evil ensues causing Amelia to leave all that she knows and loves. She must flee Dahomey with her brother, to southwestern Nigeria. In a faraway land, she finds the love of a new family and God. The well-kept secret thought to have been dead and buried, resurrects with the flash of a thread of gold beads. Amelia must fight for her life and what is left of her soul. Set during the French-Dahomey war of the late 1890s in Benin Republic and early 1900s in Abeokuta and Lagos, South-Western Nigeria, Thread of Gold Beads is a delicate love story, and coming of age of a young girl. It clearly depicts the strength of the human spirit in the face of adversities.

Now you must be dying to know why I really like this book? And why you should read it?

Here are 10 things I adore about  Threads of Gold Beads:

Now over to the aspect that  I like less:

I obviously recommend this very interesting book. I can’t wait to read more from this author.

Did you read this book? What did you think?

4 thoughts on “Thread of Gold Beads By Nike Campbell-Fatoki”